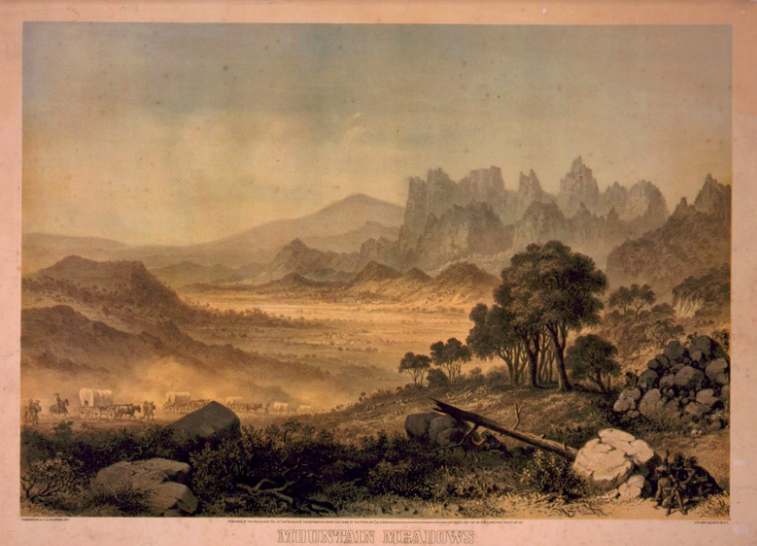 The story of the siege and massacre of approximately 120 California bound immigrants by Mormon settlers at Mountain Meadows (Washington County, 38 m. northwest of St. George) on September 11, 1857 is perhaps the second most well-known story in all of Utah’s history behind only the epic story of the 1847 Mormon Pioneers.

The massacred were hastily and incompletely buried after this horrendous event. A few attempts were made at reburying the deceased. However it was not until 1859 that U.S. Army troops, led by Major James H. Carleton, gathered as many of the remains as could be found and interred them in two mass graves (there were other scattered burial sites). The finding of these two mass graves in 2014 by Bassett, is the focus of this Speak Your Piece interview.

Guest Bio: Everett Bassett is a principal archeologist for Transcon Environmental, Inc., an environmental planning firm, with expertise in the pursuit of developing infrastructure for energy, communications, and mining. Previously Bassett worked as contact archeologist for a firm doing extensive work for the Utah Division of Oil, Gas and Mining. He has degrees in biology, history and anthropology. As a young man Bassett worked as a logger and served in the United States Merchant Marines.

Do you have a question or comment, or a proposed guest for “Speak Your Piece?” Write us at “ask a historian” – askahistorian@utah.gov

Described as an effort at true reconciliation, written by those representing the Church of Jesus Christ of Latter-day Saints, the book offers an up-to-date, complete and honest accounting of the massacre.

Will Bagley, Blood of the Prophets: Brigham Young and the Massacre at Mountain Meadows; University Of Oklahoma Press, 2002

This is the book that triggered a multimillion dollar response by the LDS Church in discovering, researching, and make accessible records previously inaccessible for research. For many historians there is a problem with this book’s primary argument, that church President Brigham Young approved the massacre, as the preponderance of evidence indicates otherwise. Bagley book however does make clear that Brigham Young, the church, and leaders in Southern Utah, systematically obstructed justice related to the massacre for over twenty years.

Shannon A. Novak, House of Mourning: A Biocultural History of the Mountain Meadows Massacre, University of Utah Press, 2008

Written in the perspective of an anthropologist and a historian, the author focuses on the victim’s stories, their prior life in the South, why they were moving to California, and how their mass execution is a story of converging cultural and material forces in antebellum America. Novak conducted forensic analysis of some of the skeletal remains at the MMM site which were accidently exhumed years earlier.

Seventy years ago, Brooks’ told a stunning, honest yet sympathetic narrative about the massacre, which for the preceding hundred years was minimalized and lied about in Mormon society.

Do you want to visit the Mountain Meadows site? At the present (August 2020) the public cannot tour the two burial sites discussed in this podcast. Read about it at: